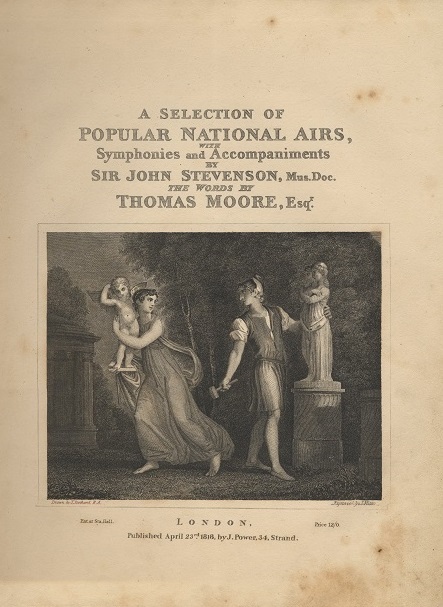 "Why don't you announce the National Melodies in the newspapers - Is this the name you have determined on? I should rather have preferred (what I believe I called them at first) "Airs of all Countries" or something, perhaps, shorter than this - but I suppose the title's engraving [...]"

In the end, this six-volume song series was to be known as the "National Airs". The first number was published on 23 April 1818. As was the case with the Irish Melodies, which by that year was in its sixth number, Moore yet again collaborated with publishers and brothers James and William Power, and Dublin-based composer John Stevenson (1761-1833). In contrast to the Irish Melodies, Moore looked beyond the music of his homeland and sourced melodies from the following countries: Spain, Portugal, Italy, Hungary, Russia, France, Germany, Malta, Switzerland, Sweeden, England, Scotland, Wales, Denmark, Austria and India. Moore acquired these melodies in a variety of ways; while travelling, through acquaintances in society and through advertisements placed by James Power. Moore set the lyrics to the melodies while Stevenson composed the piano accompaniments. Each number in the National Airs series contains 12 songs, some of which are also arranged as harmonised airs. 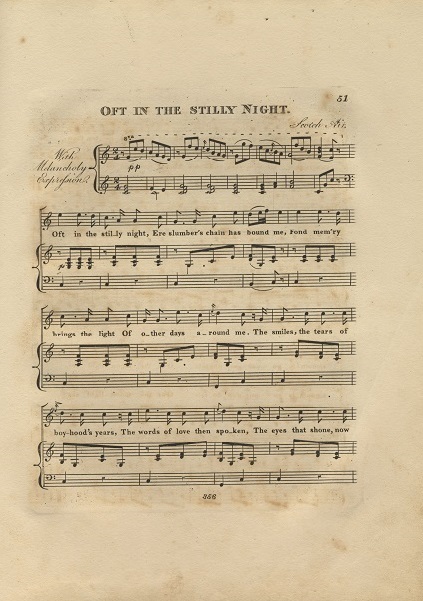 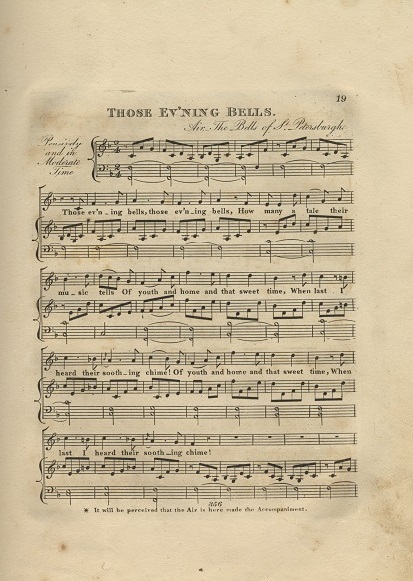 Two of the most popular songs published in the First Number, and from the complete National Airs, are Oft in the Stilly Night and Those Ev'ning Bells. Set to a Scottish melody, Oft in the Stilly Night proved very popular on publication. It was quickly re-issued as a single and published thus in Dublin and in London by brothers James and William Power. Published in later nineteenth-century collected editions and anthologies, the song has also been arranged for pianoforte, and it is referenced in the writings of James Joyce.

Those Ev'ning Bells is often referred to as The Bells of St. Petersburg, the title of the original Russian melody to which the song is set. The top line of Stevenson's piano accompaniment, which moves in quavers throughout, aptly reflects the rhythms evident in the text set by Moore;

Both songs were re-issued as singles and published in London by R. Cocks & Co., W. Williams, Addison & Hodson and Chappell & Co. The re-issue and arrangement of the more popular Airs further aided the dissemination of Moore's work. 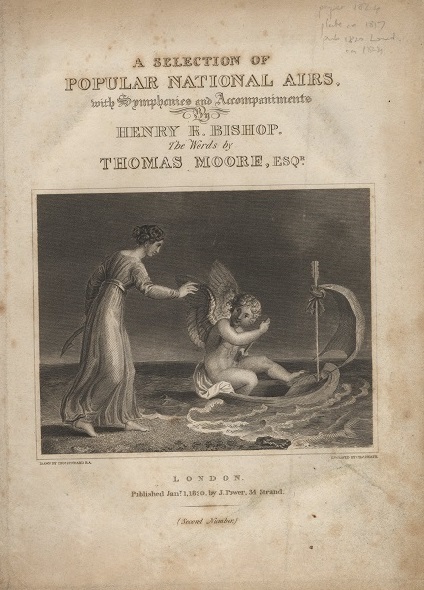 Stevenson was engaged for the First Number of the Airs only. For the remaining numbers London-based composer Henry Rowley Bishop (1786-1855) was engaged to set the piano accompaniments. This change in personnel resulted from the legal battle which ensued between the Power brothers. Bishop was music director of Covent Garden. He was enjoying success in London owing to the popularity of his operas and theatre music. The Second Number was published in February 1820. 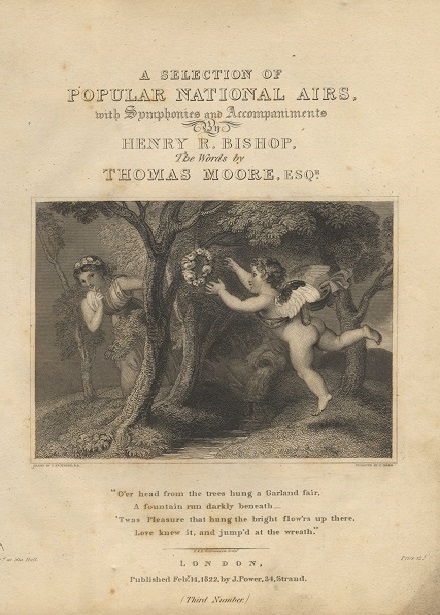 The year 1822 saw the publication of both the Third and Fourth Numbers of the National Airs. In his letter to James Power, March 1822, Moore writes

"I forgot last time to tell you that I had received the 3rd Number, and like it exceedingly. I only hope the public will be of my opinion about it." 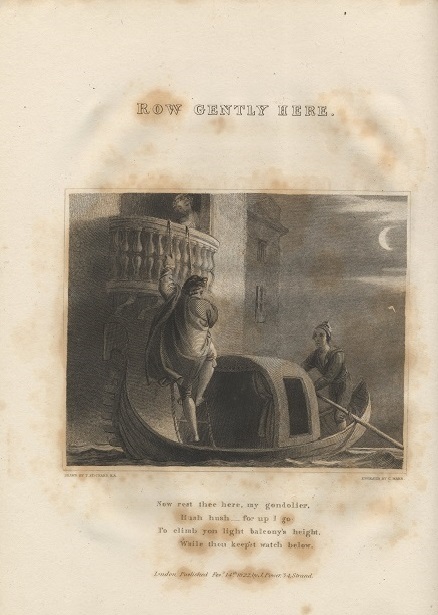 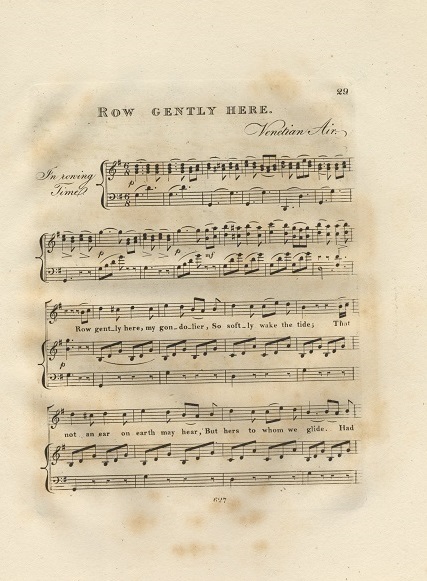 Moore's National Airs include at least one, and sometimes two illustrations which convey the story of select songs in the collection. The example included in the exhibition is for the song Row Gently Here from the Third Number; illustrated by Thomas Stothard and engraved by Charles Marr. Stothard and Marr regularly contributed illustrations and engravings to Moore's collections. Moore's work exemplifies the various printing techniques such as engraving and lithography in vogue in nineteenth-century London. Engraved beneath the illustration is text from the second verse which reads;

"Now rest thee here, my gondolier, Hush, hush - for up I go, To climb yon light balony's height, While thou keep'st watch below."

This barcarolle is a two verse setting to a Venetian melody. 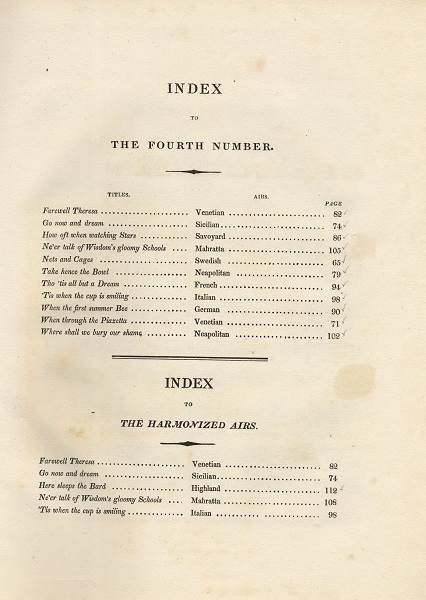 Each volume of the National Airs includes a printed index, listing all songs and the origin of the melodies used. Illustrated here is the index to the Fourth Number. This volume includes 12 songs, 11 for solo voice, 4 of which are also set as harmonised airs. 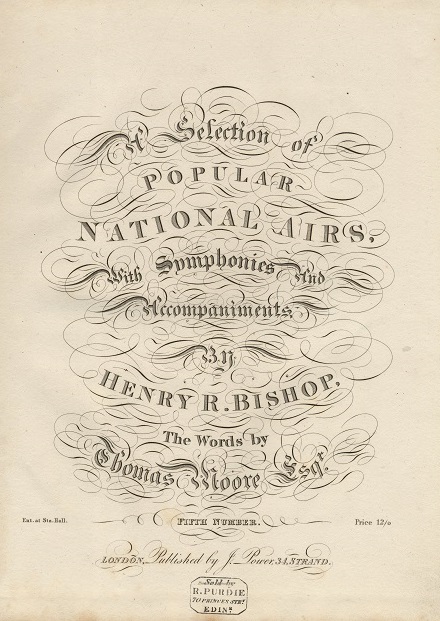 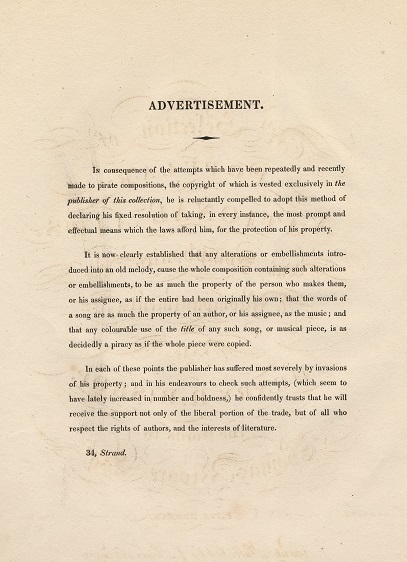 The Fifth and Sixth Numbers of the National Airs were published in 1826 and 1827 respectively. Included here is the title page for the Fifth Number which shows a distinct change in printing design and style from that used for the earlier numbers. This title page bears the stamp of Edinburgh-based music seller R. Purdie. Each Number could be purchased at a cost of 12 shillings, making these publications a 'luxury item'. The inclusion of elaborate title pages, illustrations and catalogues in these editions guaranteed their presence in drawing rooms across London.

In the advertisement to the Fifth Number, shown here, James Power makes a statement regarding copyright, a wise move no doubt owing to the legal battle which ensued between Power and his brother William over the Irish Melodies. 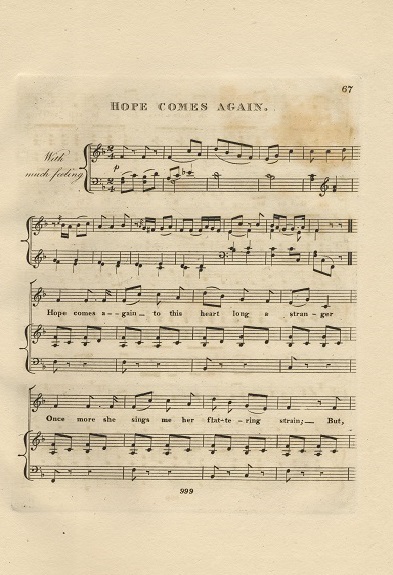 Sentimentality, love themes and pastoral themes are central to Moore's lyrics. One such example is Hope comes again the first song from the Sixth Number, which is set to an old English melody.

The map illustrates all the locations associated with Moore sources featured in the exhibition. London is highlighted as the centre for publication for the National Airs.

England, Scotland, Russia and Italy are highlighted as countries from which Moore sourced melodies for the songs featured in the exhibition.

The Moore Collection held at Special Collections & Archives, Queen's University Belfast includes 31 items of printed music for the National Airs. It is a significant collection of sources from which we can assess Moore's creative process and the contribution the Irish poet-songwriter made to the development of romantic national song in nineteenth-century Europe.