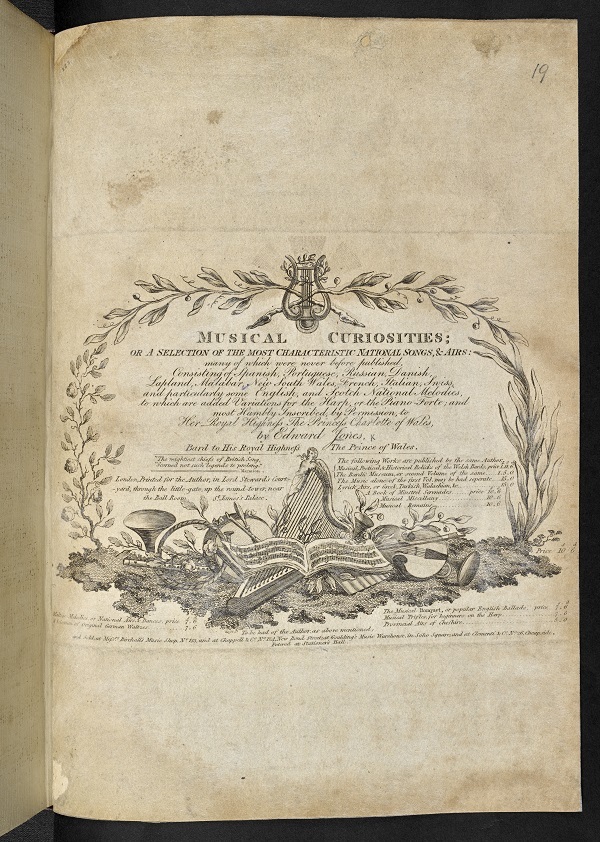 Edward Jones (1752-1824) was a Welsh harper, historian and composer. He published a total of 9 collected arrangements of national airs. His collections feature melodies from a broad range of nations and regions including Greece, Albania, Turkey, Persia, China, Malta, Denmark, Lapland and New South Wales. He also arranged the music of Celitic countries including Scotland, Ireland and his homeland Wales. Illustrated in the exhibition are images from his 1811 publication entitled Musical Curiosities. This publication contains a selection of national songs and airs arranged for harp or piano. They include melodies from the following countries and regions: Spain, Portugal, Russia Denmark, Lapland, Malabar, New South Wales, France, Italy, Switzerland, England and Scotland. A selection of music for 4 of these airs and melodies is included in this exhibtion. 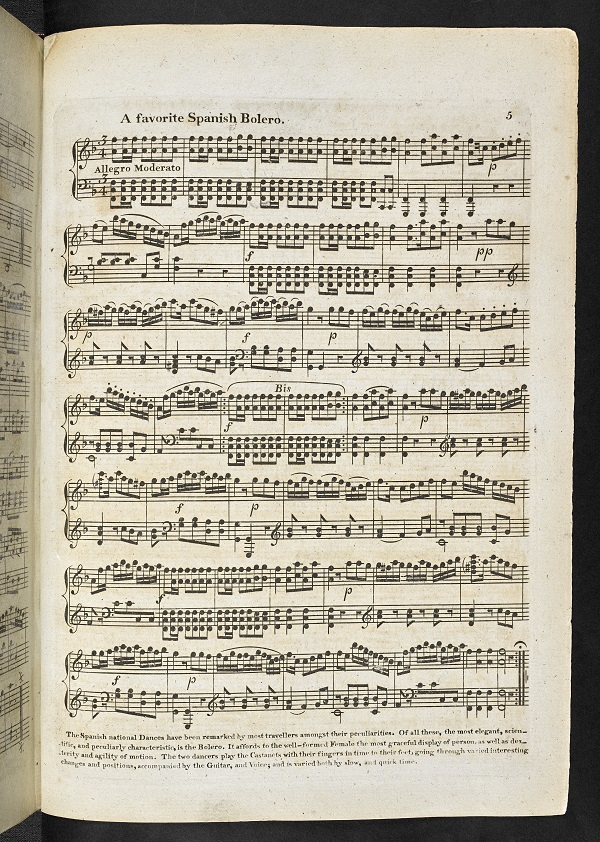 This image illustrates music for a Spanish Bolero. Jones includes an interesting footnote, transcribed here; "The Spanish national Dances have been remarked by most travellers amongst their peculiarities. Of all these, the most elegant, scientific and peculiarly characteristic is the Bolero. It affords to the well-informed Female the most graceful display of person, as well as dexterity and agility of motion. The two dancers play the Castanets with their fingers in time to their feet, going through various interesting changes and postures, accompanied by the Guitar, and Voice; and is varied by both slow, and quick time." 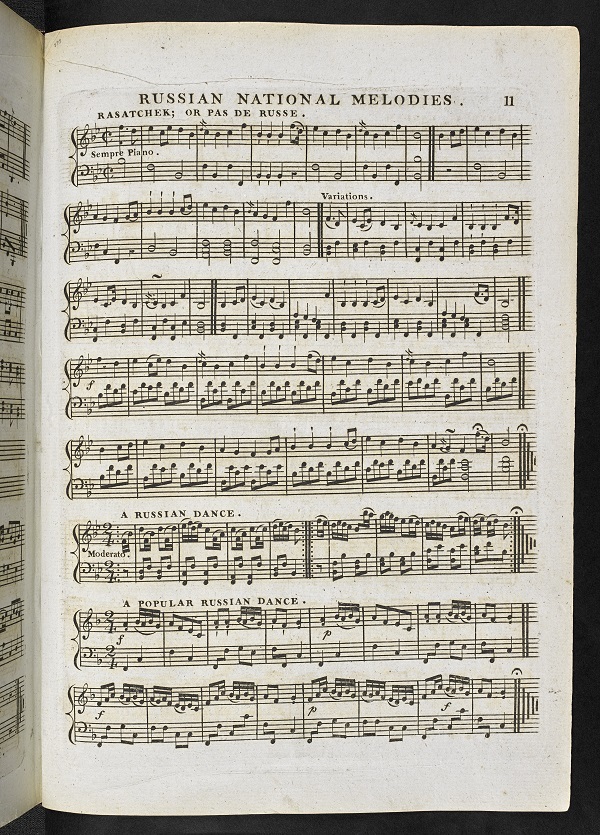 This image illustrates sheet music for Russian National Melodies comprising a selection of variations and dances. 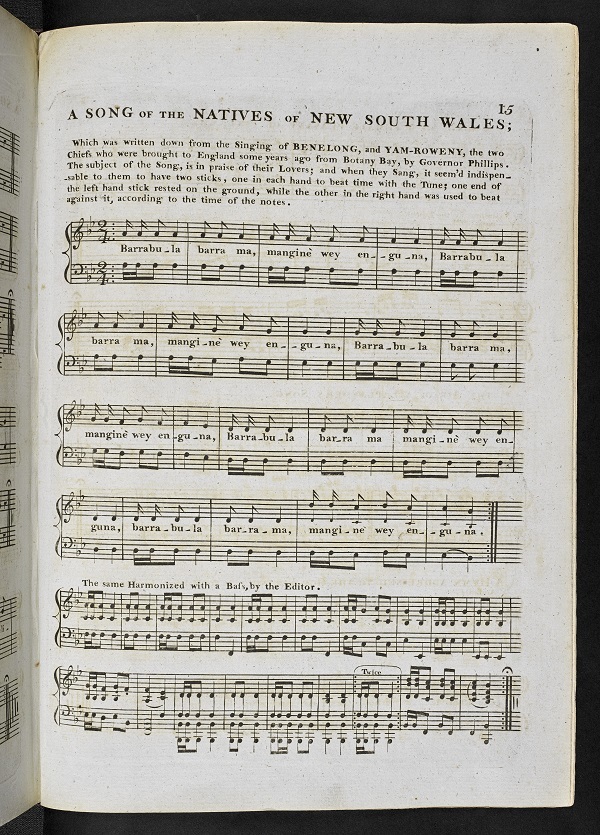 A Song of the Natives of New South Wales

Jones includes the following explanatory note for this song: "A SONG of the NATIVES of NEW SOUTH WALES: which was written down from the singing of BENELONG, and YAM-ROWENY, the two Chiefs who were brought to England some years ago from Botany Bay by Governor Phillips. The subject of the Song is in praise of their Lovers; and when they sang, it seem'd indispensible to them to have two sticks, one in each hand to beat time with the Tune; one end of the left hand stick rested on the ground, while the other in the right hand was used to beat against it, according to the time of the notes." 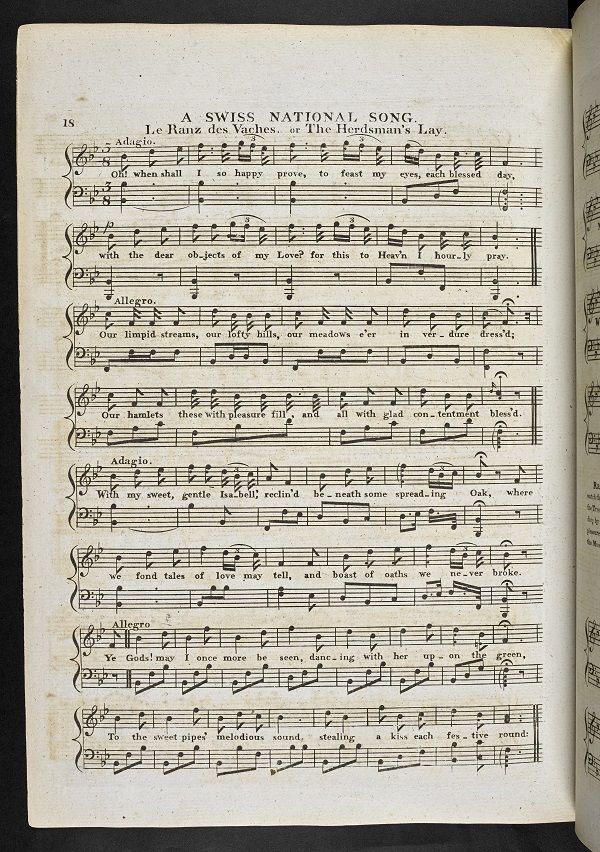 This song, entitled Le Ranz des Vaches (The Herdsman's Lay) with English text is set to a Swiss melody. The love theme throughout is interspersed with pastoral references.

The above map illustrates all the locations associated with this source. Although the identity of the publisher for the source is unknown information on the title page confirms that it was printed in London.

Spain, Switzerland, Russia and Australia are highlighted in the map as countries from which Jones sourced melodies for the series. He looked beyond modern day Europe to source melodies for his collections. The British Library Music Collections include 6 editions of national airs arranged by Jones, all of which were printed in London between 1804 and 1813. Unlike the collections by Moore, Beethoven and Czerny featured in this exhibition, Jones’ collection includes both instrumental and vocal arrangements in the same publication.