Somerville and Ross strongly believed in the suffragette cause and actively demonstrated and campaigned for women's rights both in Ireland and England. They both took part in the electioneering campaign for Conservative and Unionist Women's Franchise Association in East Anglia in 1895, and when Somerville took over as Master of the West Carbery Foxhounds in 1903, she became Ireland's first female Master of Foxhounds (MFH). 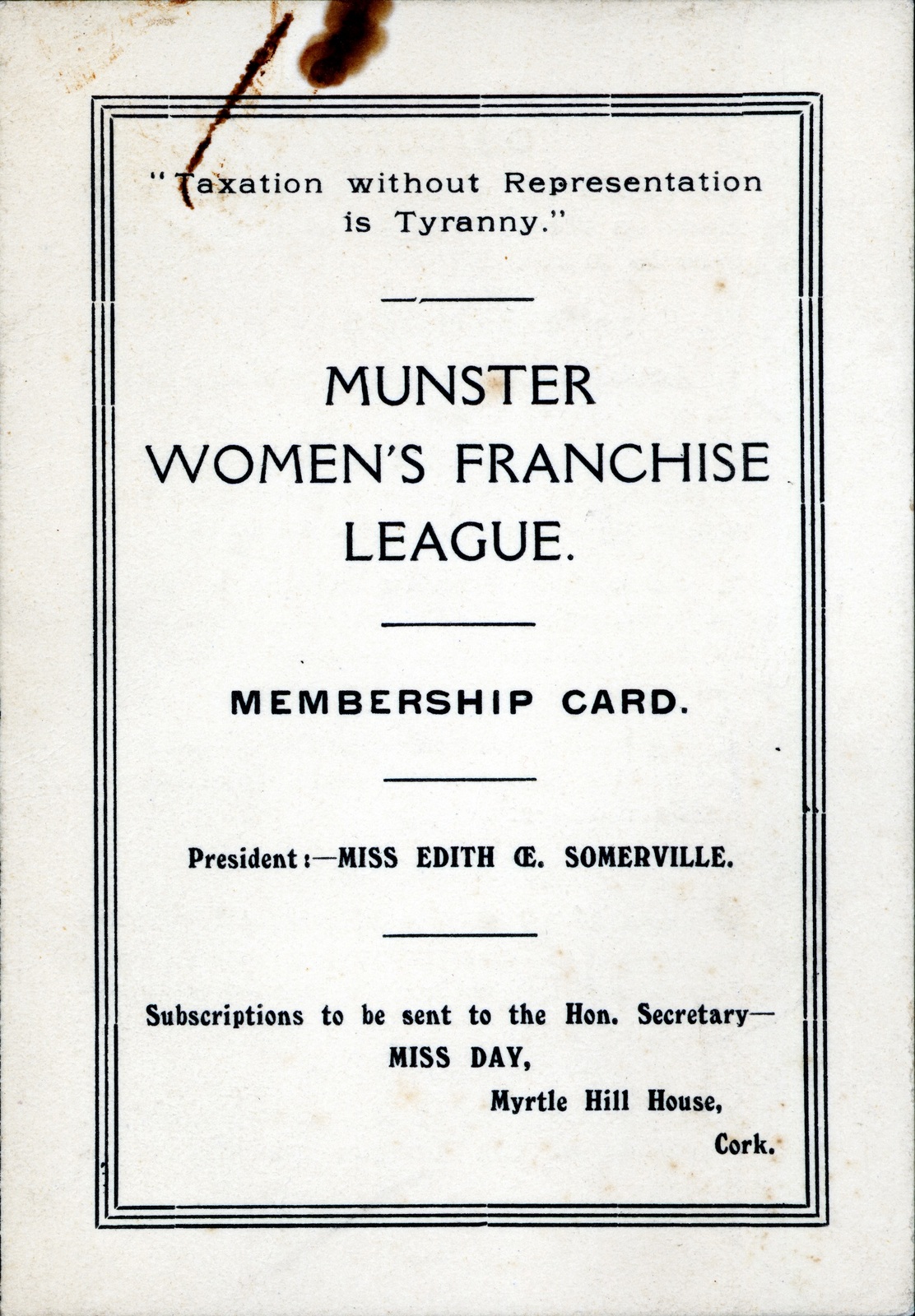 The National Union of Women’s Suffrage Societies was founded in 1897, and in 1910 Somerville became the first President of the Munster Women’s Franchise League (MWFL) with Ross as one of her Vice-Presidents. In the first year of their presidency, Somerville and Ross organised 16 meetings of the Franchise League in Cork, Waterford, Bandon, and Skibbereen, as well as establishing two further branches of the league in Waterford and Skibbereen.

Both Somerville and Ross advocated education for women as the foremost strategy in improving women's public rights. In her speech to the MWFI in December 1911, "The educational Aspect of Sufferage", Somerville maintained that only a practical education: "shall arouse women's constructive sense, shall make them critical". 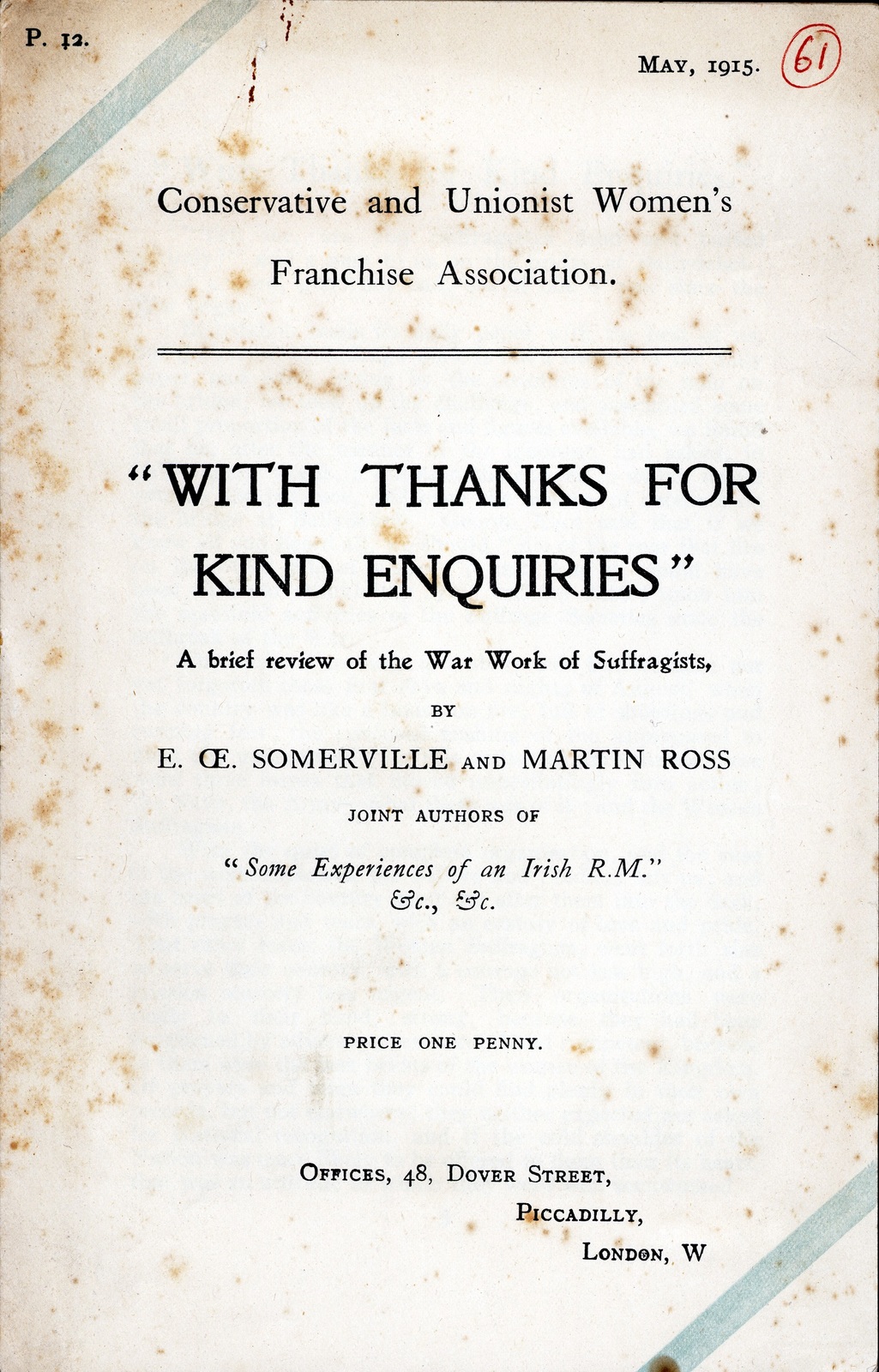 MS 17/898 ‘With Thanks for Kind Enquiries. A brief review of the War Work of Suffragists.’ Conservative and Unionist Women’s Franchise Association.

‘With the quiet of complete organisation, and the ease of the well-rehearsed, the Sailors and Soldiers left us, and the heart of the country went out after them into the dark, with prayers and tears, with an ecstasy of love and pride. That other force, the woman Suffragists, went forth also to serve their country, with a courage not less high, and a mission scarcely less urgent. Their organisations were ready to hand, strong, because they had been toughened by adversity, resourceful and competent, because in them were the best brains of the women of the Kingdom. Of prayers and tears they could find plenty in their own records, but not elsewhere; they neither expected nor asked for National recognition, and if the cold shoulder of the Nation was more likely to be offered to them than its heart, that was an attitude to which they were well accustomed.’ 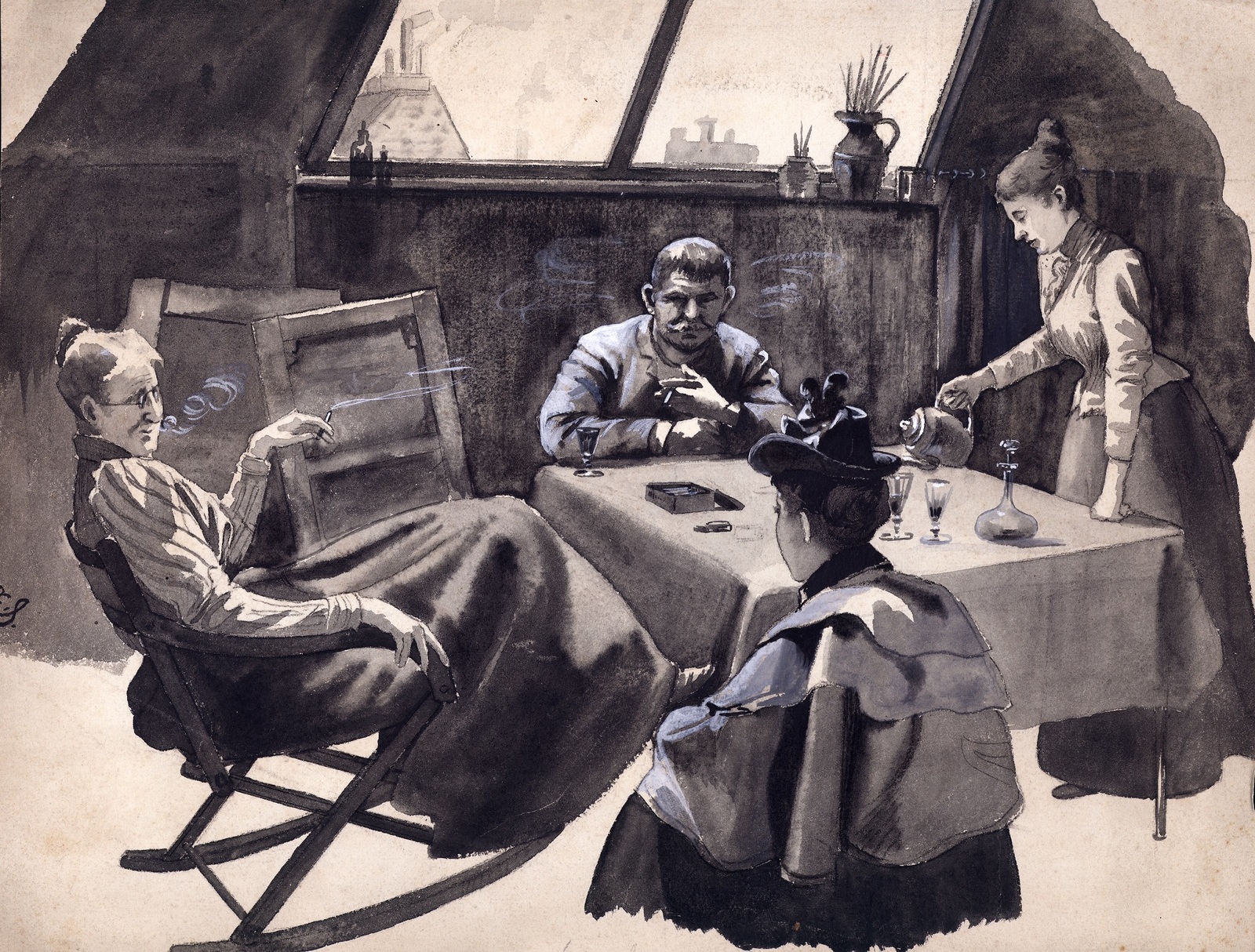 ‘Froken Krebs alone knows what long and hardy efforts were necessary before the Government school for women was achieved; what interminable sessions of parliament; what innumerable letters and audiences; what labyrinths of red tape. Except in later years, women have been little accounted of in Denmark; ladies were the object of that chivalry that would shield them as far as possible from earning any money for themselves, while it accepted the fact that other women worked in cells and slept in garrets, and did the same work as men, at a lower wage. But in spite of prejudice, in spite of the vapid maxims on which women of the upper classes have been nourished, there is, even in conservative Denmark, a new era coming to them, and there are women who have let the world know they can work as well as weep. “In the state of Denmark’ in stray-aways (London: Longmans, Green & Co., 1920) pp 161-2