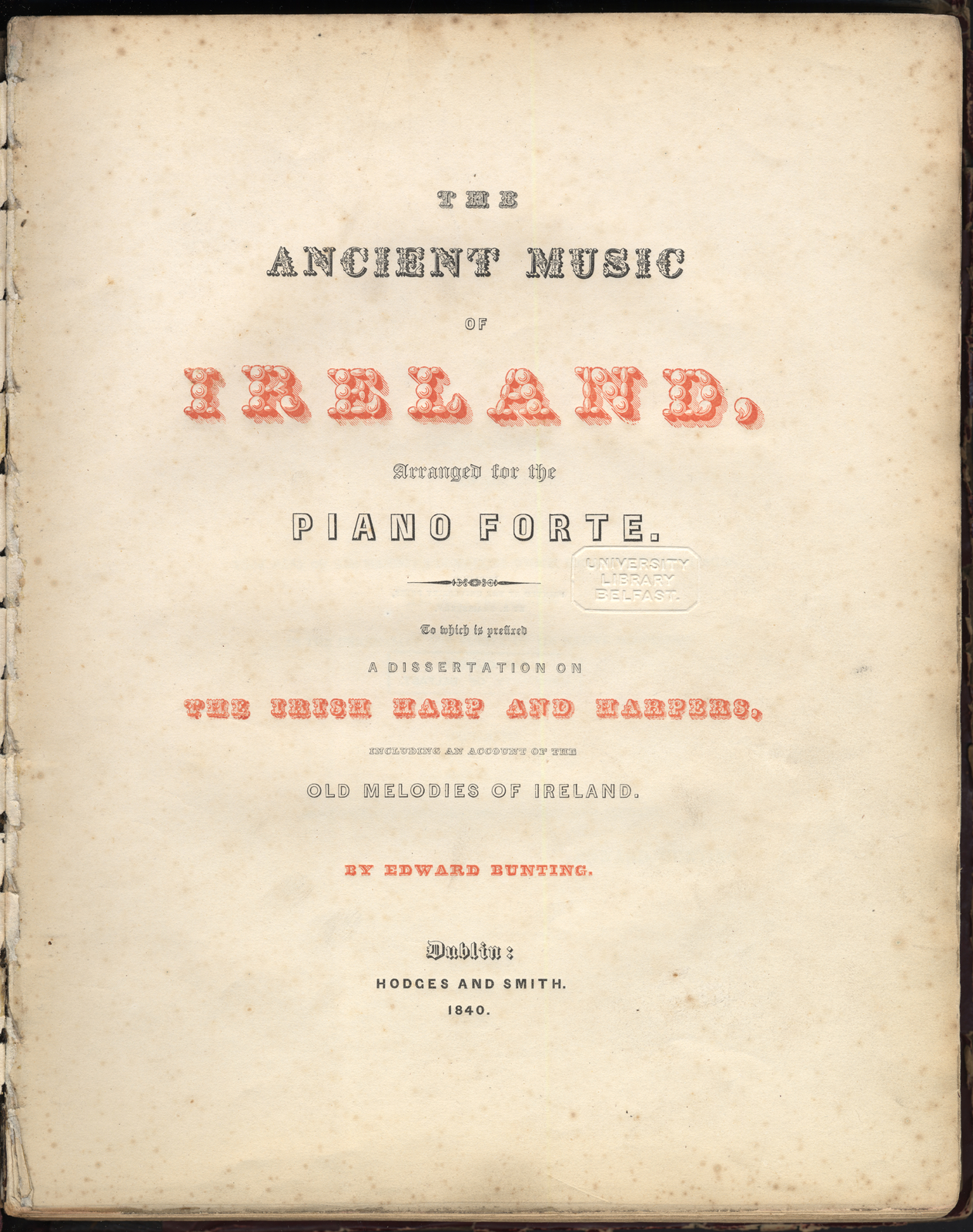 Title page from Bunting's 1840 publication The Ancient Music of Ireland MS 4/43. Donated to Queen's University with the original Bunting Collection in 1917.

Bunting is best known for the three volumes of music he published in 1797, 1809 and 1840. These books were very influential in their time but unfortunately commercially unsuccessful. This was in part due to pirate editions and also Thomas Moore's use of the melodies for his very popular Irish Melodies (1808-1834). Many of the tunes became synonymous with the lyrics Moore wrote for them such was the success of Irish Melodies.

Although Bunting faithfully collected traditional music and song he arranged it for piano in his published volumes. This may have been due to pressure from printers and publishers or simply Bunting's own taste being a classically trained musician.

Interestingly many of the tunes that appear in Bunting's publications are nowhere to be found in the manuscripts indicating that a number of Bunting manuscripts have indeed been lost. 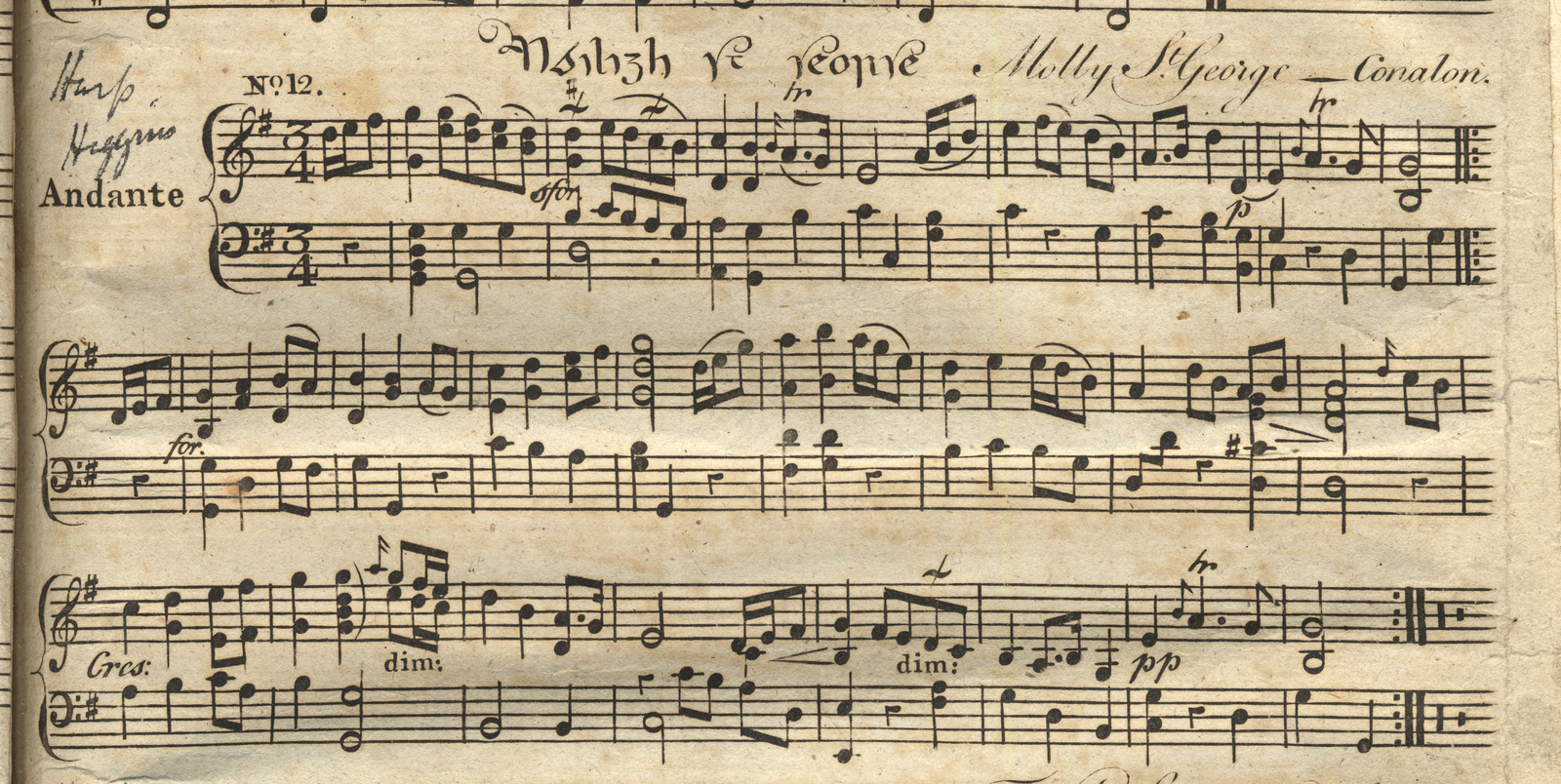 Molly St George from Bunting's 1797 A General Collection of the Ancient Irish Music MS 4/41. Donated to Queen's in 1917 with the original Bunting Collection.

Bunting’s first published collection contains a short preface and 66 tunes drawn from the Belfast Harp Festival and subsequent visits to Mayo, Derry and Tyrone. Melodies in this publication can be found in MS 4/29. Note the difference between the hastily scribbled tune in the image below and the finished Bunting product above. 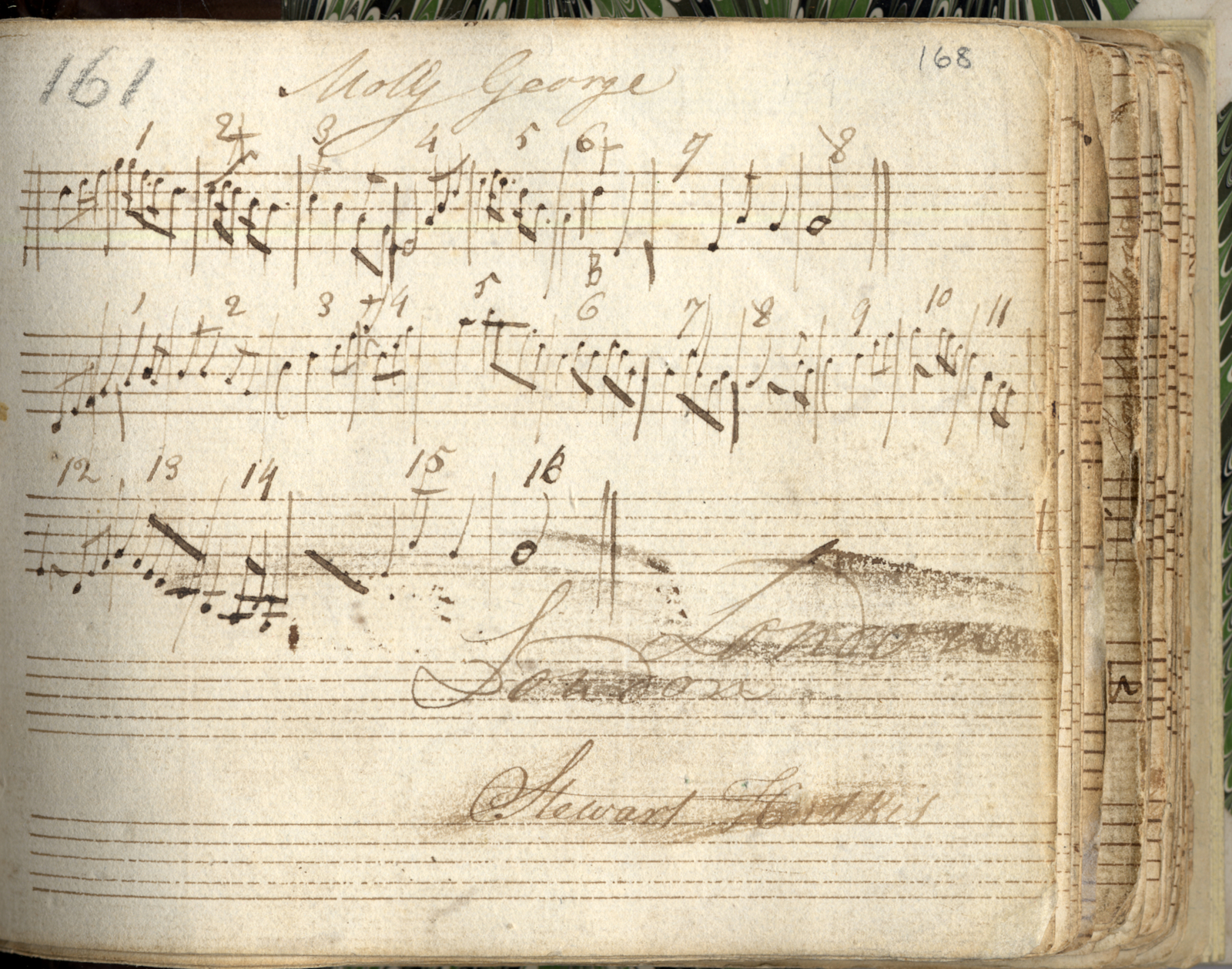 The second published collection includes a longer preface and 77 tunes. Bunting commissioned songs in English to be written for some of the melodies. This is somewhat surprising as he had paid agents to collect the original Irish words to the songs.

The most important of these agents was Patrick Lynch (c. 1756-1838). Interestingly none of the songs collected and translated by Lynch were published by Bunting, despite their being of a high quality. It is thought that this was because Bunting never forgave Lynch for giving evidence against his friend Thomas Russell (1767-1803) at his trial. He was being tried for his part in Robert Emmet's failed rebellion of 1803. Russell was executed by hanging at Downpatrick Gaol in October 1803. 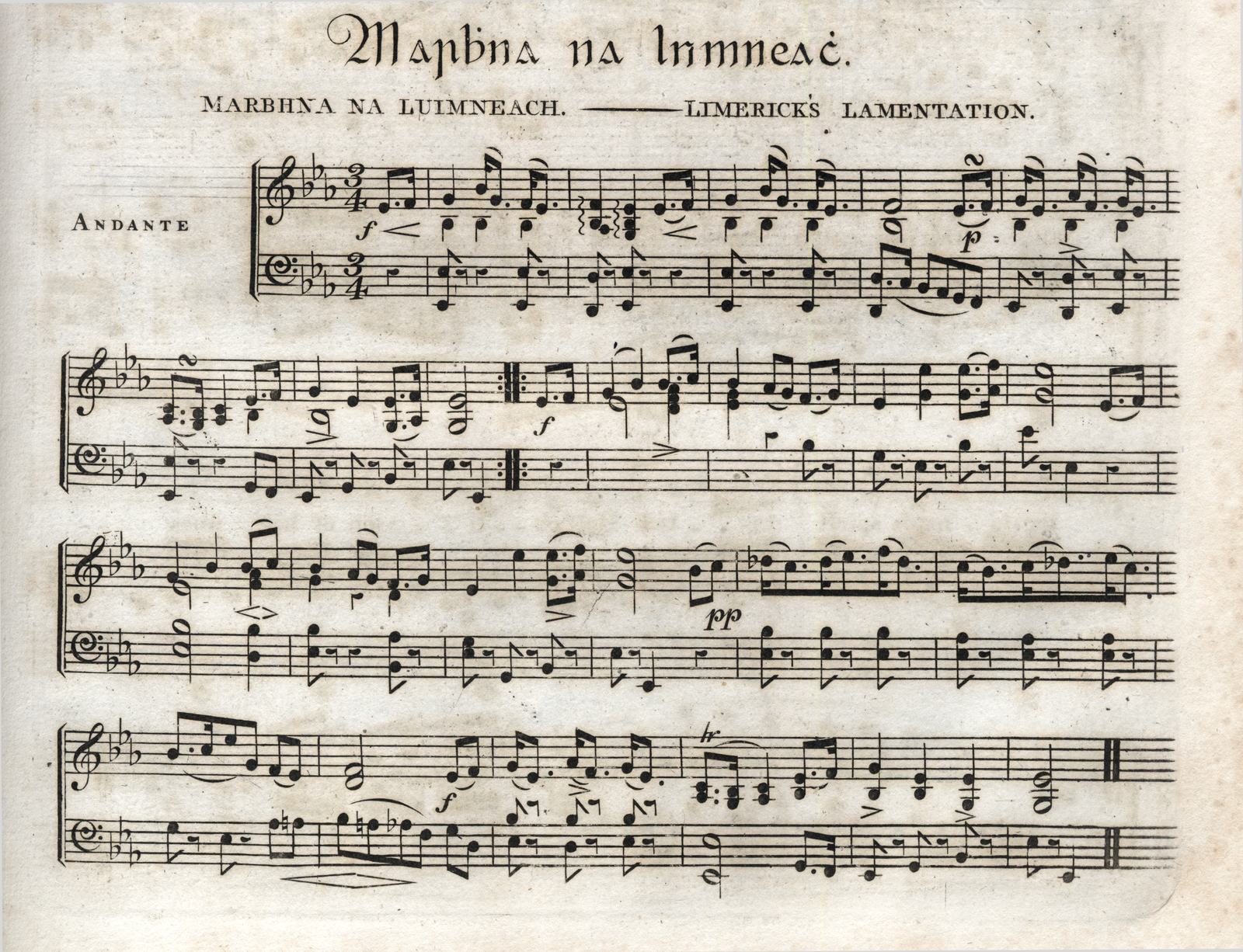 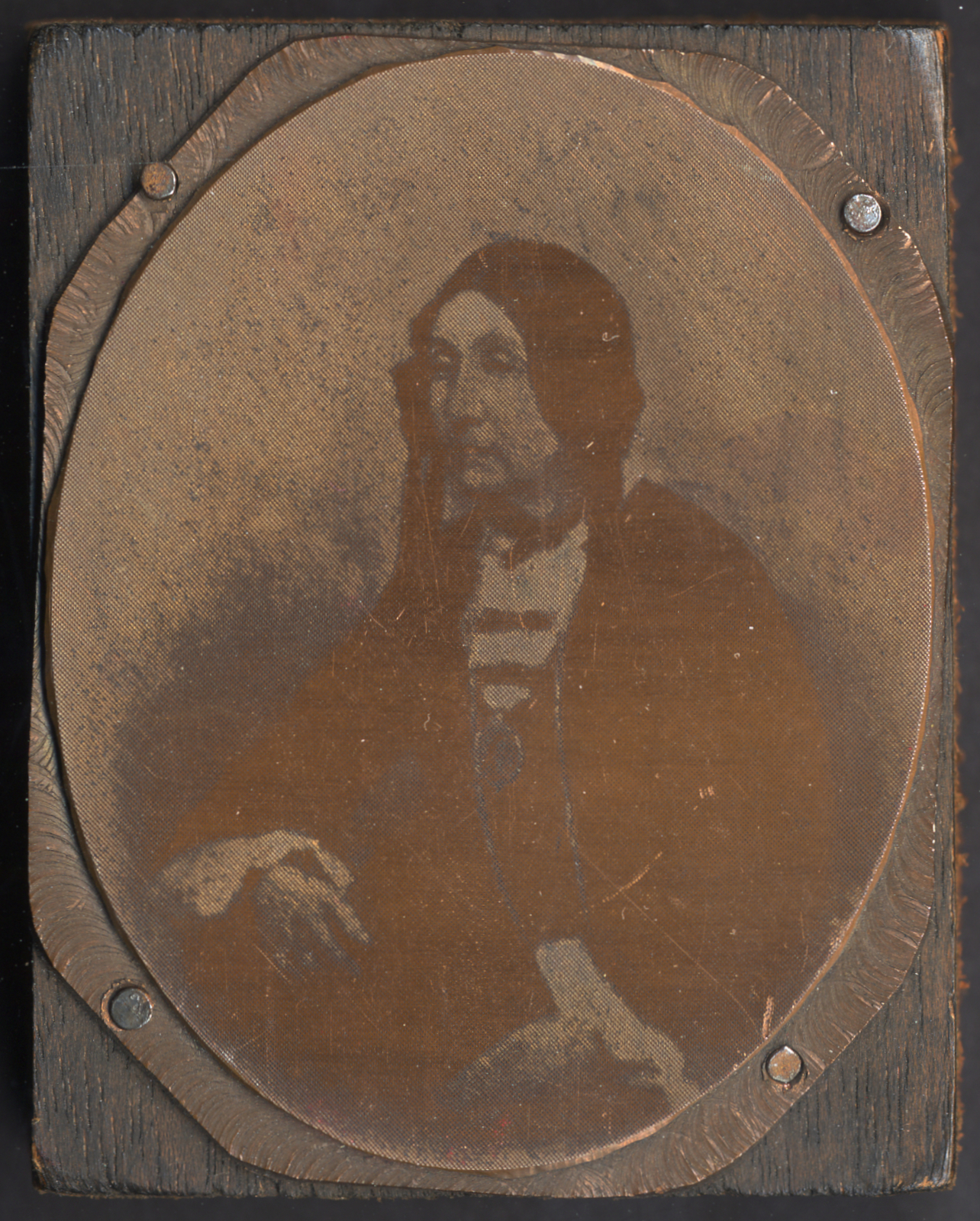 Bunting published his final volume in 1840. It contains a lengthy discussion of harp music entitled 'A dissertation on the Irish harp and harpers, including an account of the old melodies of Ireland', this volume contains 151 tunes. He didn't collect any new music between 1809 and 1840 but arranged the music he had previously collected. He had married Mary Ann Chapman in 1819, moved to Dublin and raised 3 children so his lack of collecting in this time period was no doubt due to his new family commitments.

Bunting died only 3 years after his 1840 publication. His passion for Irish music truly did last a lifetime.

"No single individual has done so much for the national music of any country as Mr. Bunting has done for that of Ireland". Quote from the New York Freeman's Journal on the publication of his final volume, 29th of August 1840

← The Belfast Harp Festival
The Manuscripts →
The Publications